On the road in Iceland with construction material driver Thorthur Thorthar. He is from Iceland and goes by the name ÞÓRÐUR ÞÓRÐAR. Properly pronounced it sounds like 'Thorthur Thorthar'. If you ask him nicely and he's in a good mood, you can also call him 'Doddi'. The fact that he is almost always in a good mood makes everything a lot easier. Just like his Wingliner. 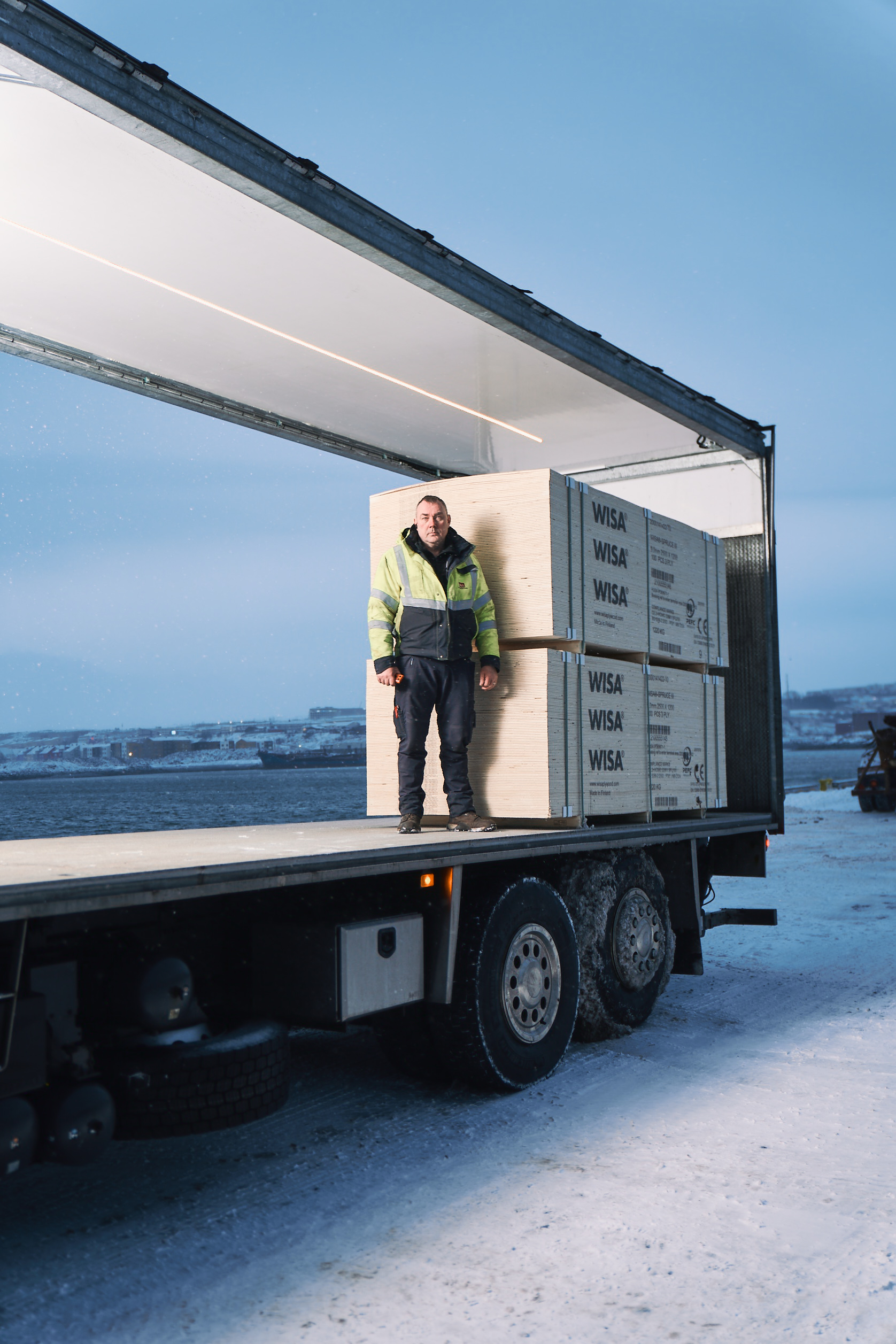 He has dreamed of this since he was a child, but Thorthur Thorthar has only been driving a truck professionally for a few years and has only had his Wingliner for a few weeks. What it can do, he couldn't have dreamed of back then.

Although Thorthur is already 57 years old, he now has every reason to be as happy as a little kid. Because he's finally exactly where he's secretly wanted to be since his earliest days: "Already as a little boy I really liked big trucks, they fascinated me from the first moment." But before he could sit in the driver's cabin of his Wingliner like he does now every day, he made a pretty long detour. Up until about three years ago, Thorthur was a police officer in Reykjavik.

But after several decades in uniform in Iceland's capital, he'd had enough. He wanted to do something completely different, a real change was needed. It quickly became clear to him in which direction this change should go: his childhood passion. So he switched and became a truck driver at the age of 54. A little bit late? Yes, perhaps. Too late? Definitely not. Because everyone who has ever followed a passion knows: better late than never.

"Already as a little boy I really liked big trucks, they fascinated me from the first moment." 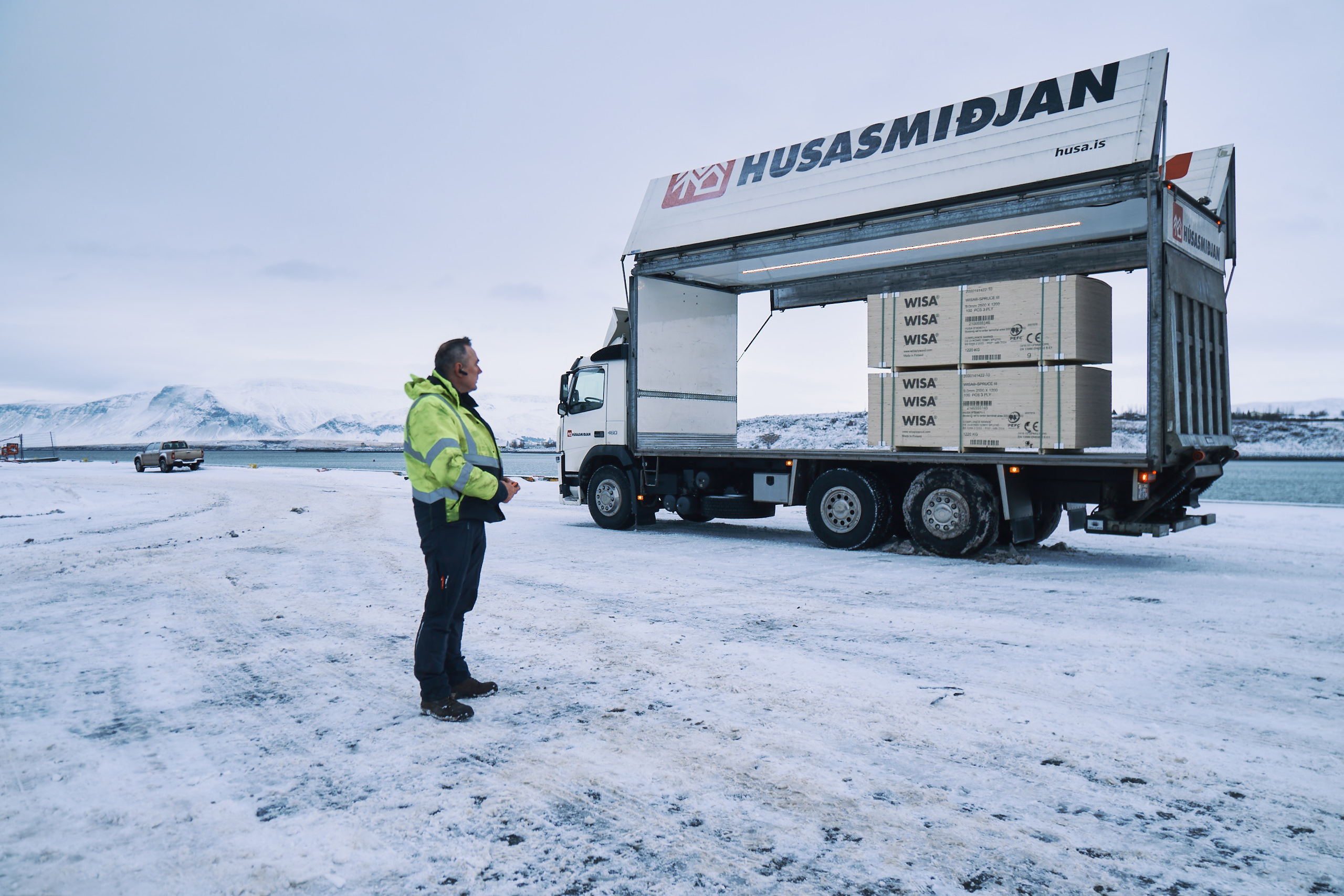 The fact that Reykjavik is not exactly known for its high level of crime may also be due to the fact that Thorthur carried out his last job as a police officer as conscientiously as his current one as a truck driver for a building materials supplier. His typical working day starts at 8am and roughly goes like this:

It speaks for Thorthur that he is far too humble to embellish his day in the Wingliner more. But when he talks about his work, you can hear with every word how much he enjoys it. His new Wingliner, with which he has been working since early 2022, plays a major role in this – or as he says with a laugh: "I don't miss the old truck." 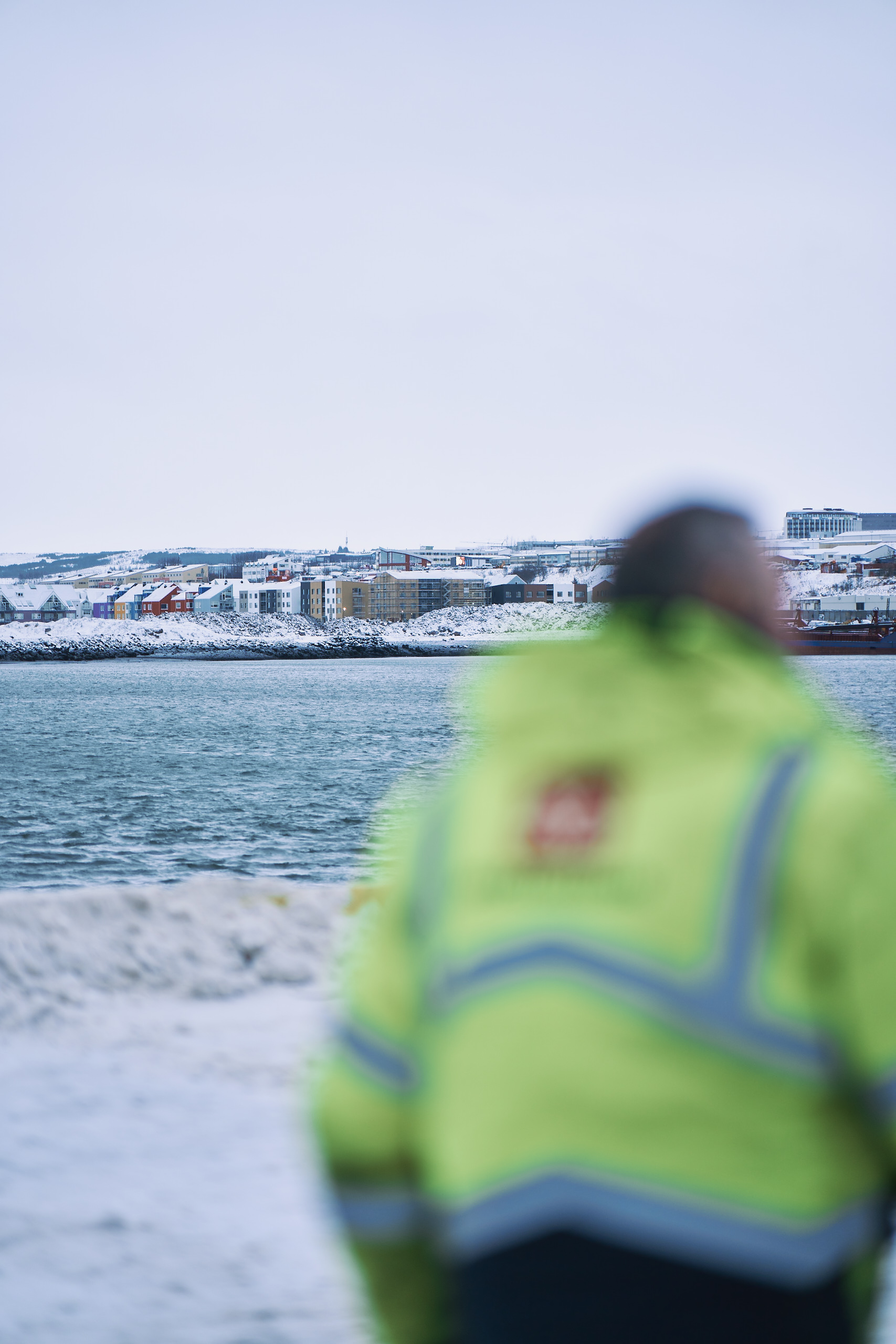 You can see why he doesn't miss his old truck at all by the way he dresses when he's hauling tons of building materials through freezing Iceland. “Unless I'm doing a photoshoot I'm just wearing a t-shirt as a top most of the time, I don't need a sweater or jacket anymore because I don't have to leave my Wingliner to get my work done. It's always nice and warm in here," he says mischievously, as if he's playing a long-planned trick on the weather in Europe's far north. Makes sense when you consider that temperatures are often well below freezing and Thorthur can control almost everything he does with his Wingliner with a remote control without having to leave the vehicle. 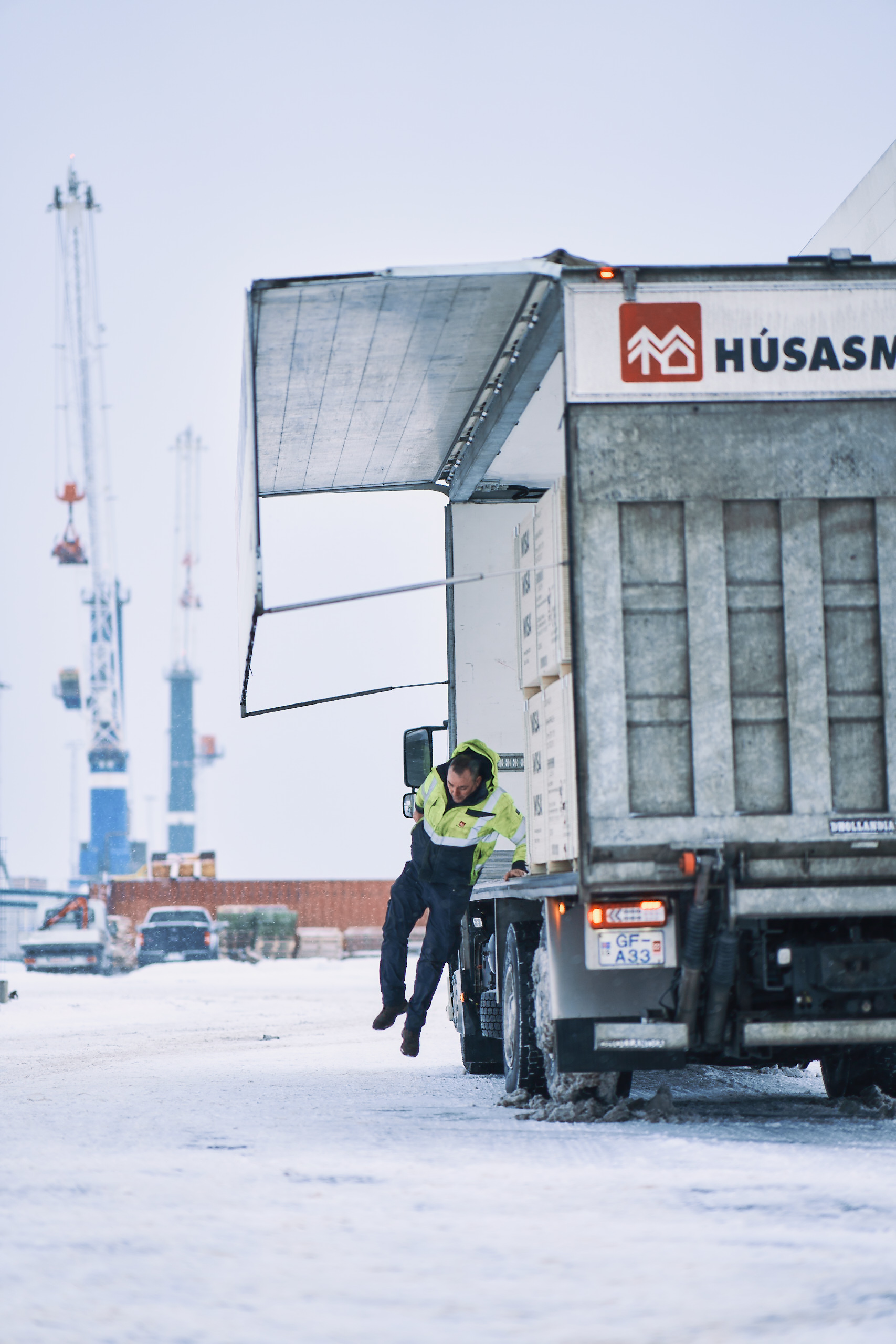 Being able to escape the bitter sub-zero temperatures and the wind when making deliveries not only makes his job more pleasant, but also much faster and, above all, safer. He is in full control at all times and stays where he likes to be: in the heated interior of his Wingliner. “I only go out for a coffee”, he jokes. So the coffee in Iceland must be pretty good. Or just warm, that's probably enough.

"Unless I'm doing a photoshoot I'm just wearing a t-shirt as a top most of the time, I don't need a sweater or jacket anymore because I don't have to leave my Wingliner to get my work done. It's always nice and warm in here." 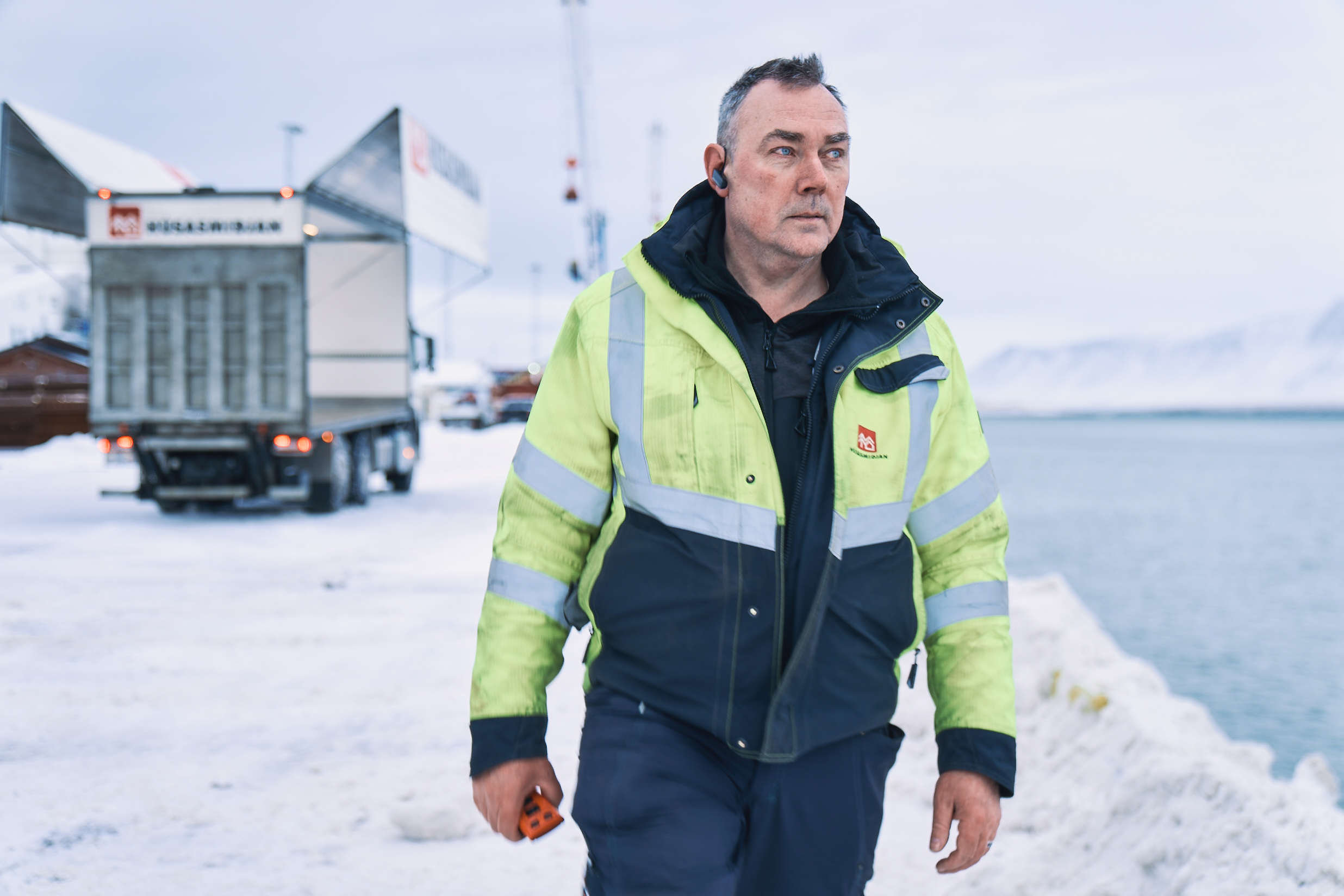