Timber distribution with the Wingliner Open Top. Dominik Vögele has been working for J. u. A. Frischeis GmbH for seven years. He started in a desk job, but after riding along with one of the truck drivers to deliver timber, there was no going back. 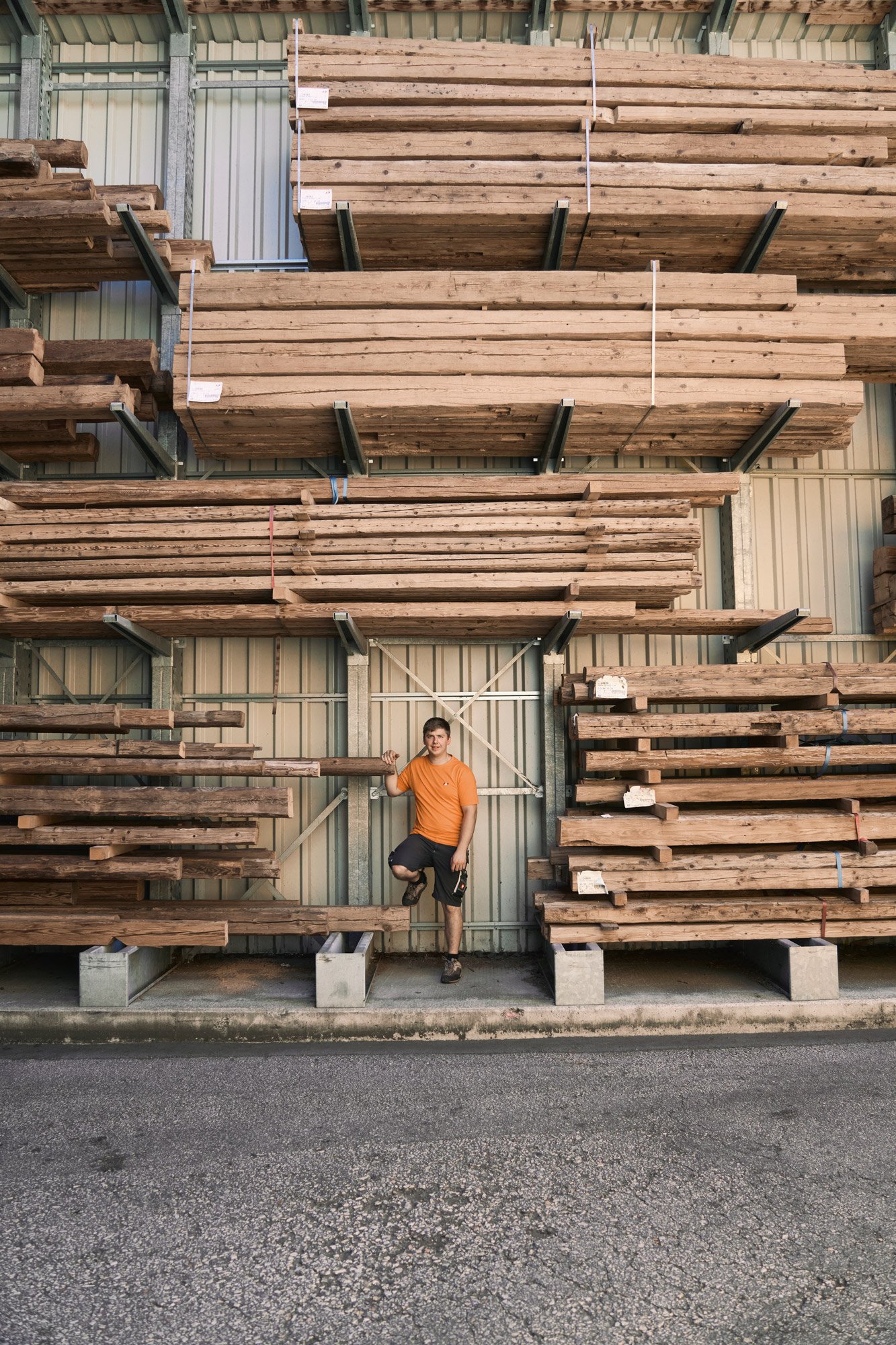 Dominik couldn’t have known where he was headed when he started his apprenticeship in an office seven years ago at Frischeis. He now knows that he has taken exactly the right direction by moving to the driver’s cab of the Wingliner truck..

After a few years of working in the office, Dominik Vögele started to get the feeling that each day was the same as the one before. With his first glimpse of the truck drivers’ tours, this feeling was confirmed: “I saw photos of where my colleagues had been and the areas in which they were driving. That really impressed me.”

Today Dominik is 26 years old and has been driving his Wingliner truck for three years. Mainly to deliver timber, but also to see a bit of the world on the side. 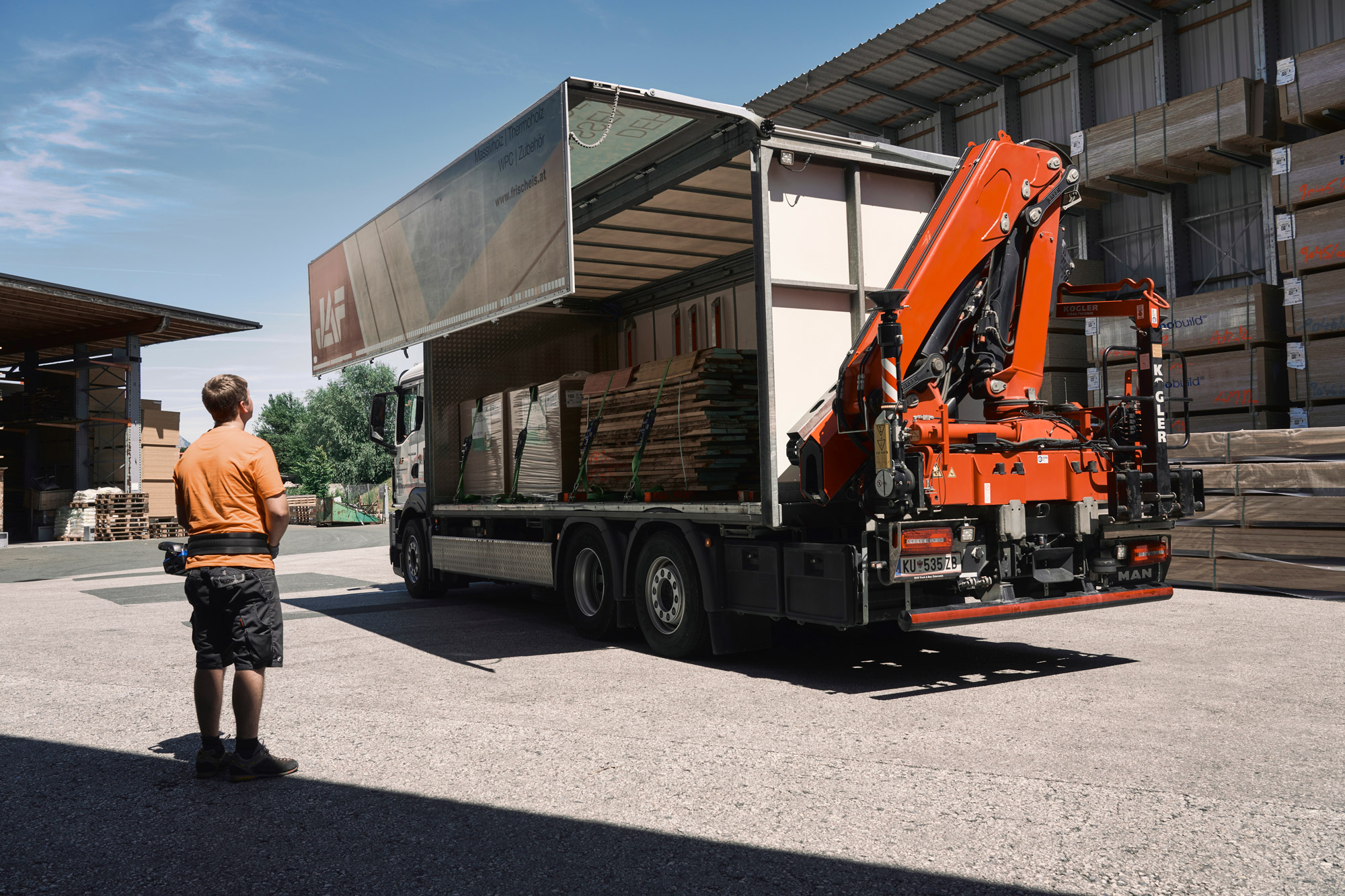 “You can remove the entire roof at ­the push of a button and open it up com-
pletely, so that the goods can be unloaded with the crane. That’s huge. You’re much faster,” says Dominik enthusiastically about his Wingliner Open Top. 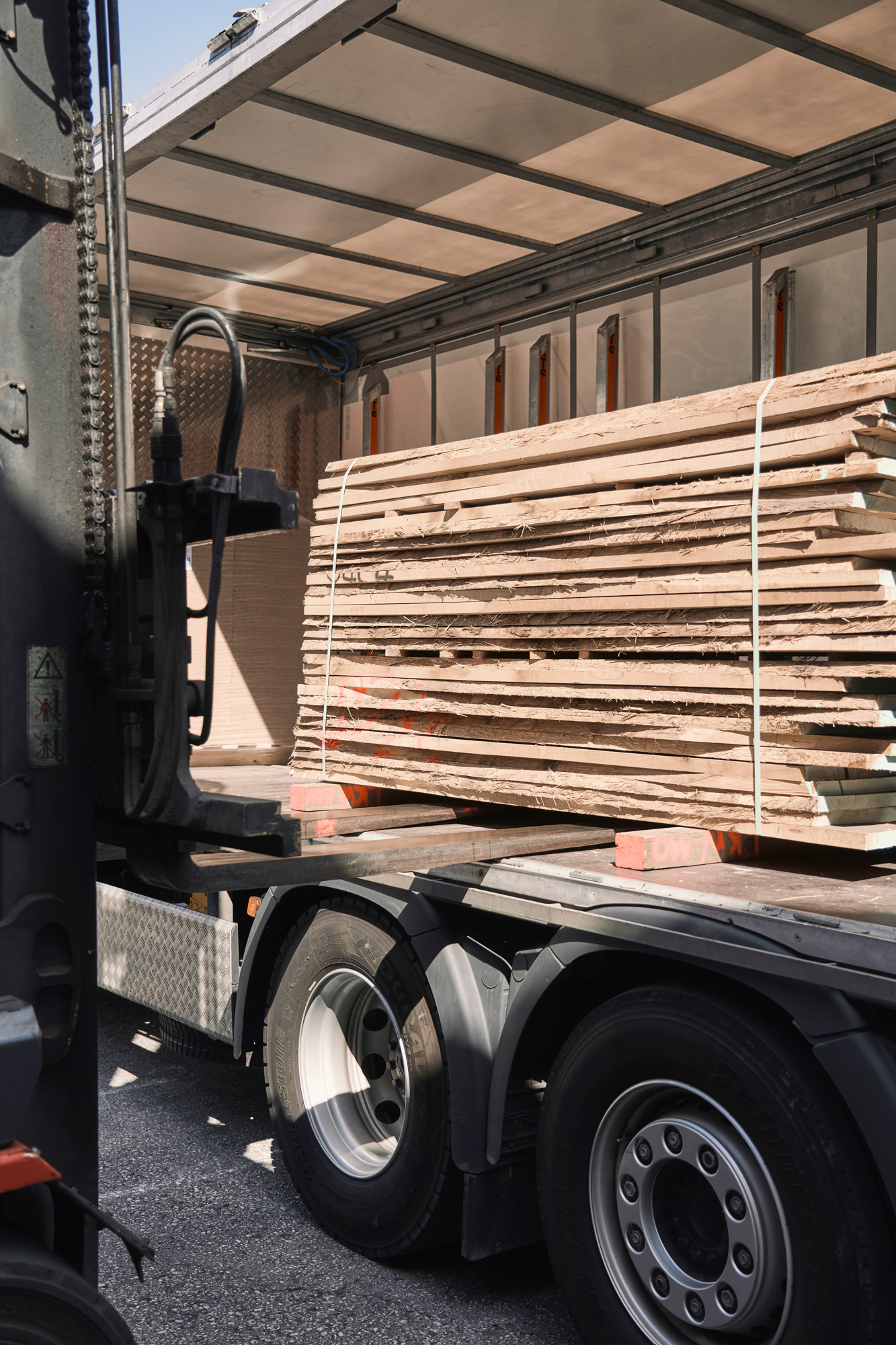 But before delivery comes the ­load­ing. Here, too, the Wingliner structure reveals its strengths by opening the side wall completely, making it easier to load with the forklift. With conventional truck bodies, you have to be careful not to damage the drop side at this point, ­Dominik tells us. Whether he is speaking from his own experience or from experience he’s gleaned from other drivers, remains unclear at this point. 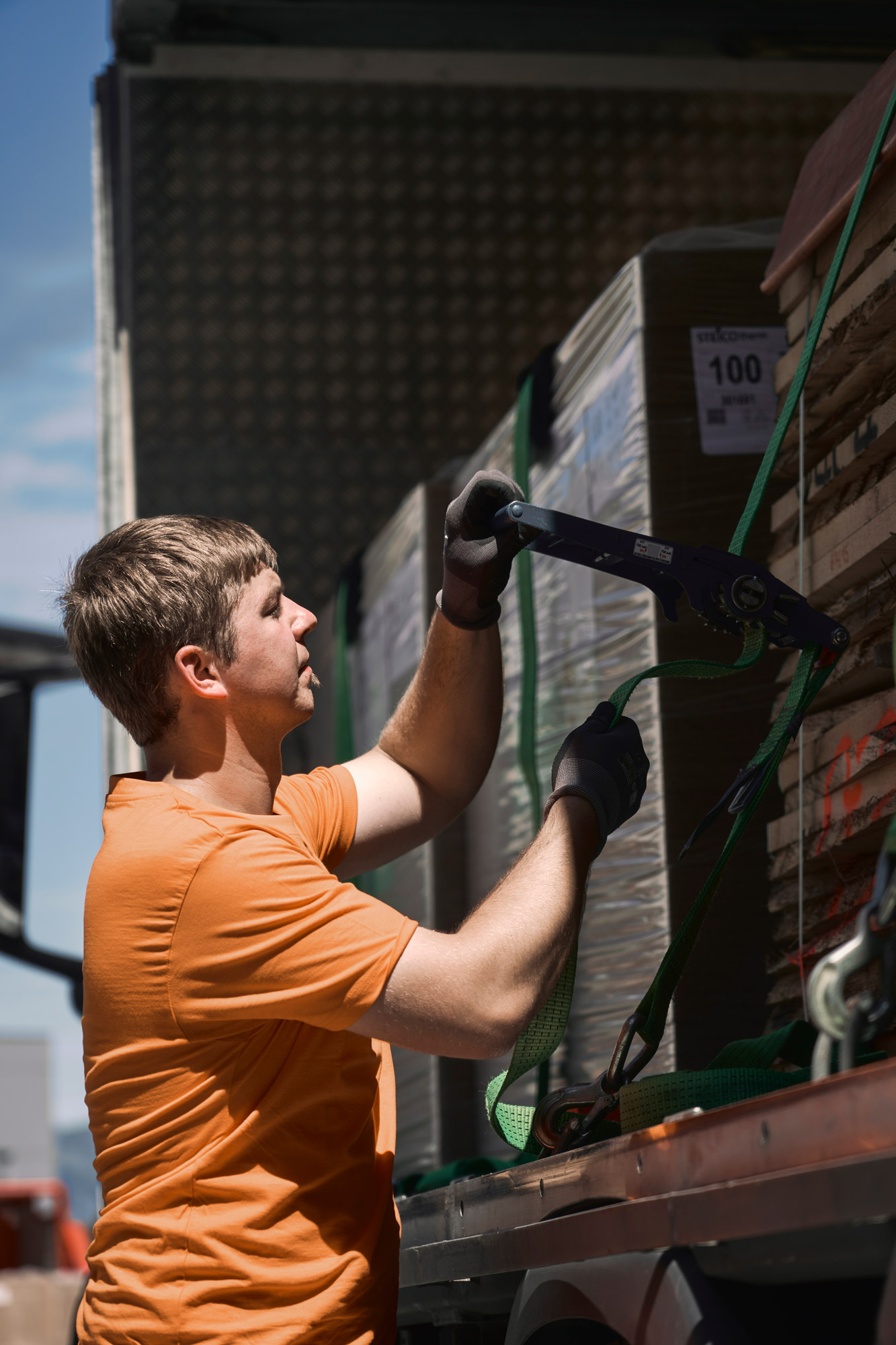 On the other hand, what is clear is that he doesn’t have to laboriously pull up tarpaulins manually, a few skillful moves with the Wingliner remote control are all it takes to stow the timber behind stable and weatherproof walls. All he has to do is secure the load himself, which, as an exception, does not occur automatically. But, as we all know, exceptions often prove the rule.

Speaking of knowledge: At some point, everything that has been loaded has to be unloaded again. To ensure that the procedure runs smoothly, Dominik always asks his customers a simple question when he arrives: Where do the goods belong? 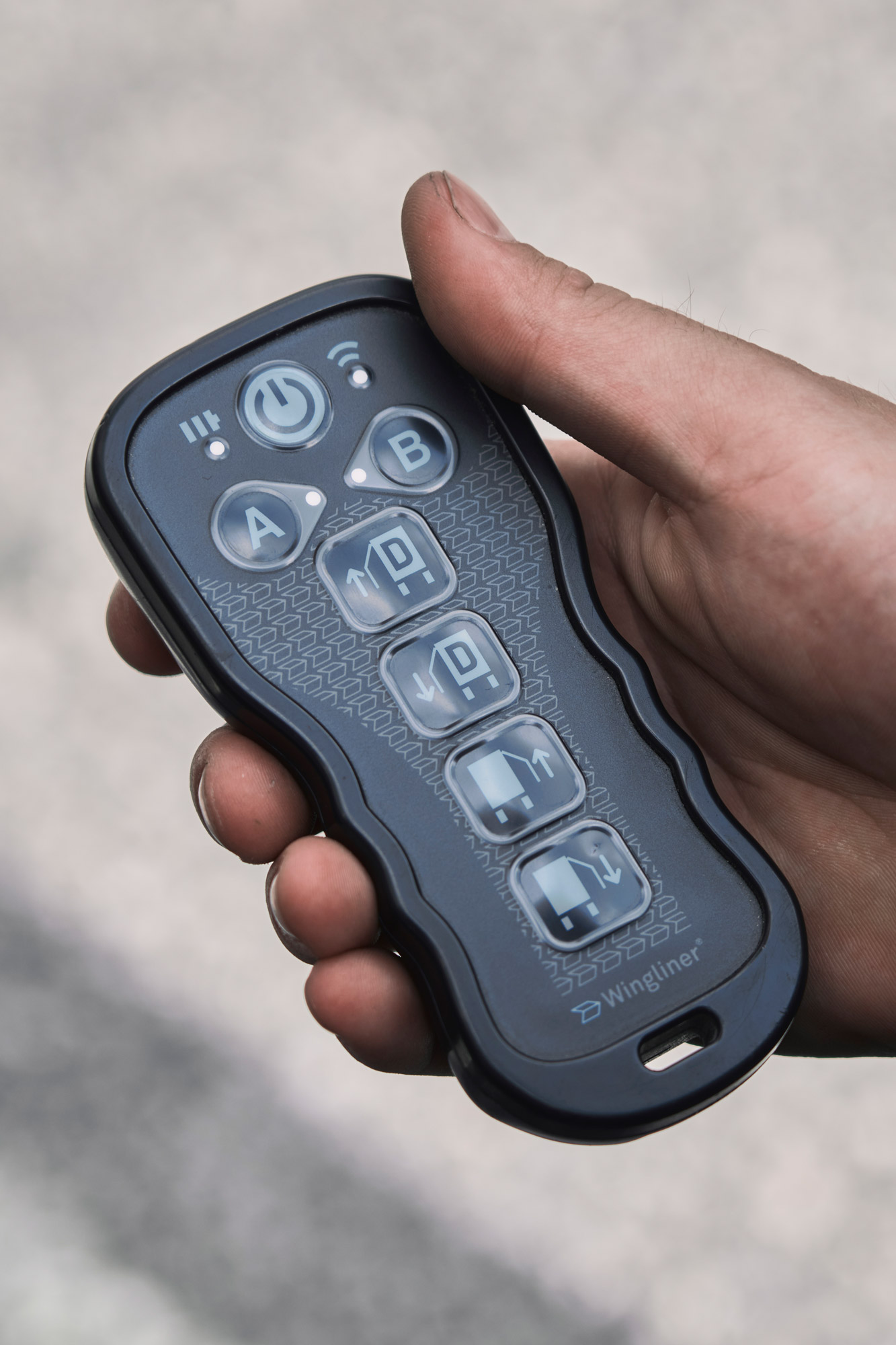 If the crane is then in the correct position, there is actually only one commandment remaining: “Make sure there are no cables above the truck.” However, there are always cases in which the goods have to be unloaded manually due to these vertical space issues. For Dominik, in these cases, it’s particularly useful in the rainy and snowy months that he can make a roof with the side wall to stay dry whilst unloading. But if, as in most cases, there is a lot of room available at the unloading site, then Dominik and his Wingliner and crane get to showcase what they can do. Step by step: Position the truck. Open side walls. Remove load securing. Switch on the crane. Open roof. Extend the supports. Extend the crane. Compared to other systems, the process of unloading the timber goes very quickly. Mostly because Dominik knows exactly what he’s doing and because he does it with the innovative Wingliner Open Top. 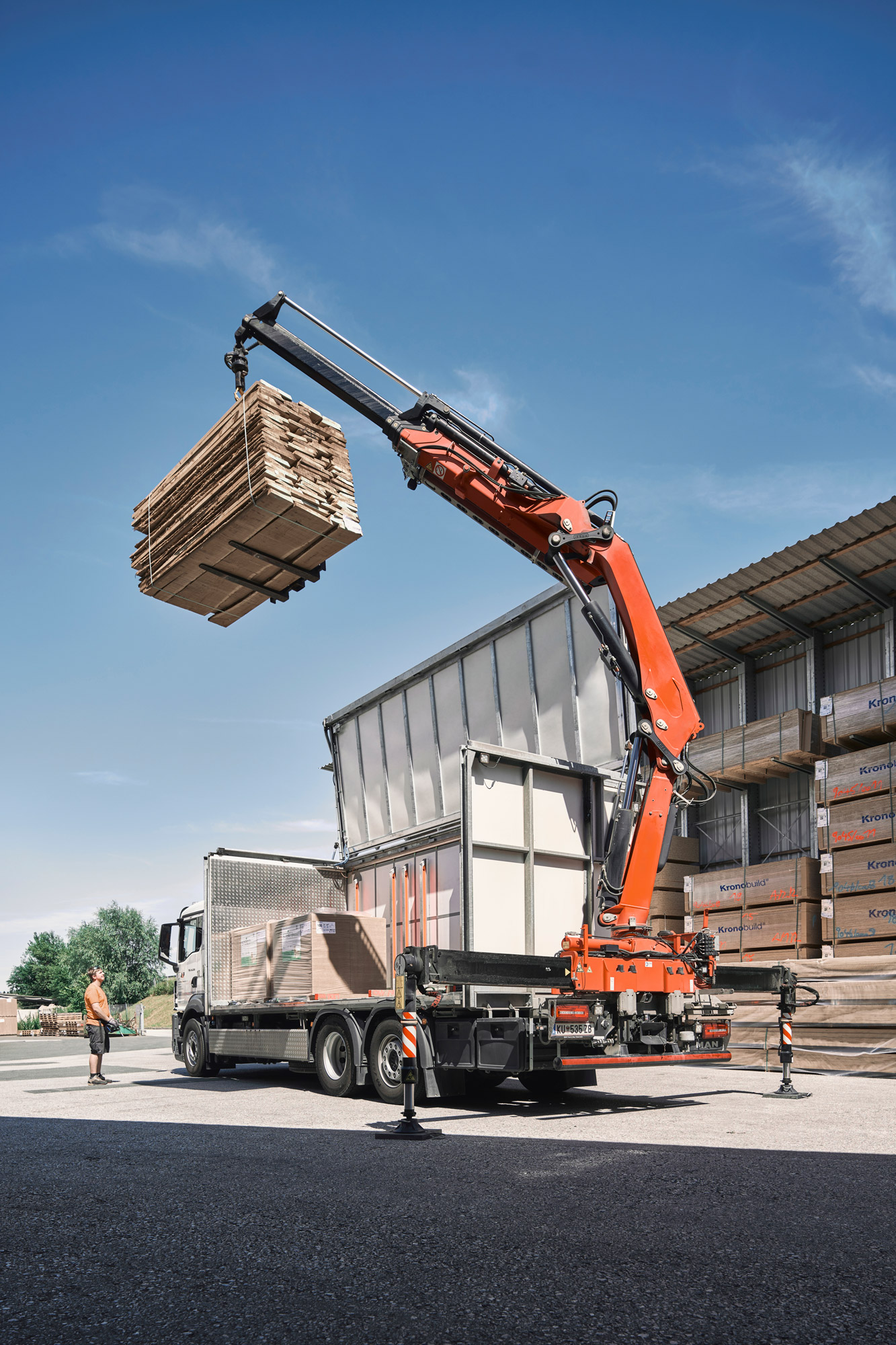 What Dominik particularly likes about his job is what happens before and after the timber is unloaded – the drive. Through southern Bavaria, through South Tyrol and everything in between: no less than all of Tyrol. Through all of the areas that fascinated him back when he saw them in photos of his workmates. Now he’s out there himself: “It’s just good for me to get out a little. See a little bit of the world. It’s only a few countries, but there are still worlds in between.” Could this be the best way to inspire another truck driver in the near future? In any case, with the reliable Wingliner, it ­shouldn’t fail – knock on wood. He certainly has enough. 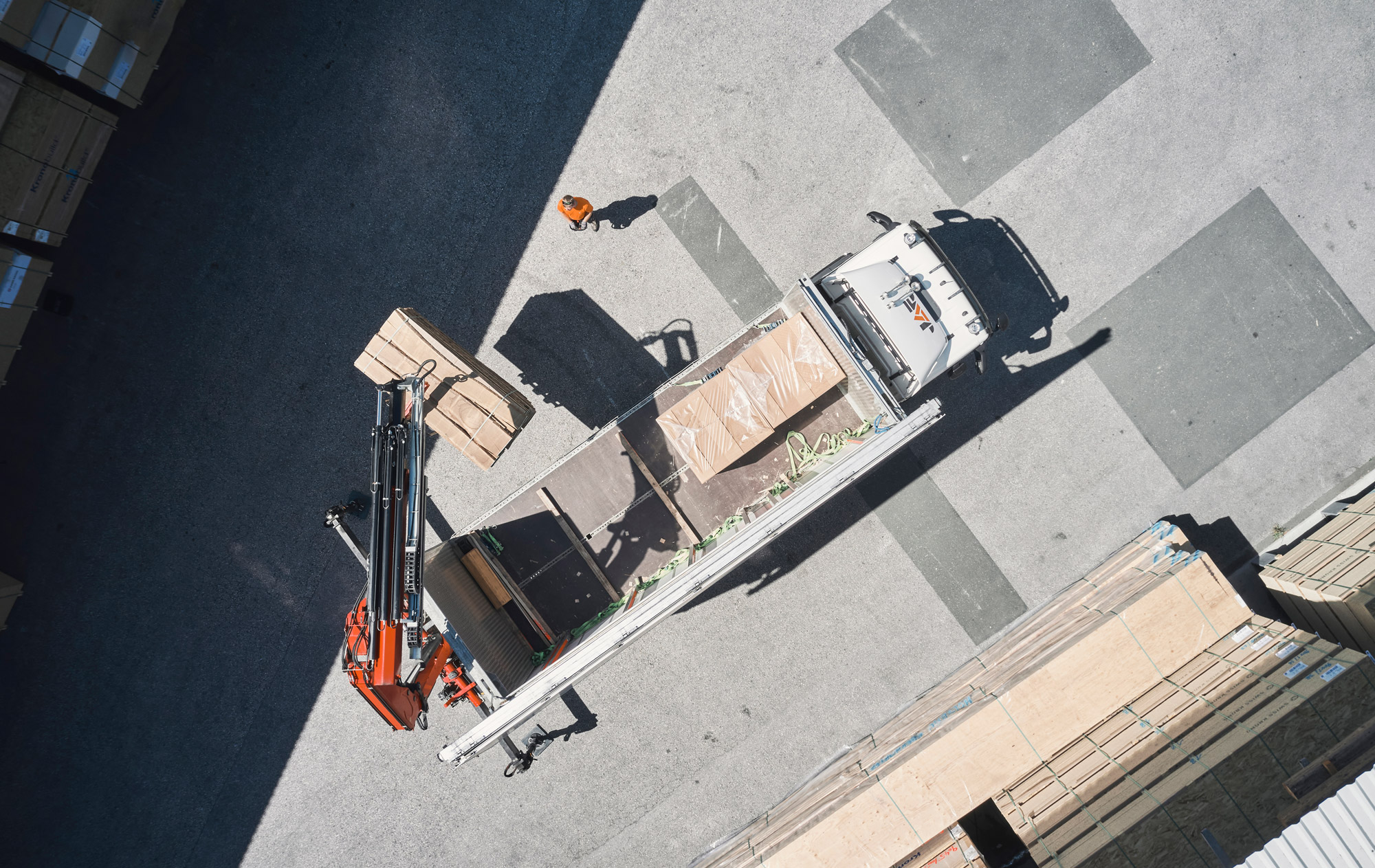